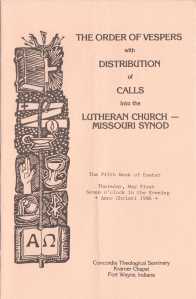 As our family gets ready to travel to St. Louis for Call Day at Concordia Seminary, we are all excited to learn where my son Adam and his wife Sarah will be placed as their complete their studies. In this post I will reminisce about my Call Day in 1986 (exactly 27 years ago) at Concordia Theological Seminary in Ft. Wayne, IN. It’s been a few years, so my recollection may be a bit fuzzy.

Lisa and I had been married for nearly two years and Adam was only three months old as Call Day approached. Our fourth year at the seminary included making Chex mix for Kroger Supermarkets, me working at Subway and Lisa doing some tutoring. The food bank helped us make ends meet with 5 lb. blocks of cheese. We were really glad when Spring arrived, since the little house we rented wasn’t very well heated. Thank goodness for that kerosene heater and a couple of labs to keep us warm.

On Call Day, Lisa’s family came up from Columbus. They had a doubly-vested interest that day since their son Jeff was also graduating. My family decided to take the train from Philadelphia and barely arrived in time for the service. I was singing with the Kantorei and playing trumpet in the balcony (one of the most amazing organs to play with), so when it was time for my call to be announced, I slipped into line and quickly learned we’d be going to Prince of Peace Lutheran Church in Coventry, Connecticut. Where the heck is that? Break out the Rand-McNally atlas. (No Google maps — this was 1986, folks). Ah-ha, just a little east of Hartford, in a beautiful rural area of the state.

As the evening progressed and called were announced, I remember one in particular. The professor announcing this one call said, “Peru…” <everyone gasped> “…Indiana” <everyone exhales>. What a great moment. The other great moment is when a certain call was announced and a very clear “Oh, s***!” was spoken. I guess that’s not where they expected to go.

I got to meet the New England District President that night, David Mulder. He was just the right man to welcome me to the district, and let me know I was not stepping into an easy situation. The last pastor at that congregation had not only been asked to resign, but had been defrocked (he was no longer able to be a pastor). Hmm, this was going to be interesting. But hey, the call came with a house! An enormous parsonage. Cool.

And just like that, we were thrust into the real world of parish ministry. (And yes, for those of you with inquiring minds, the document below was created with a typewriter!) 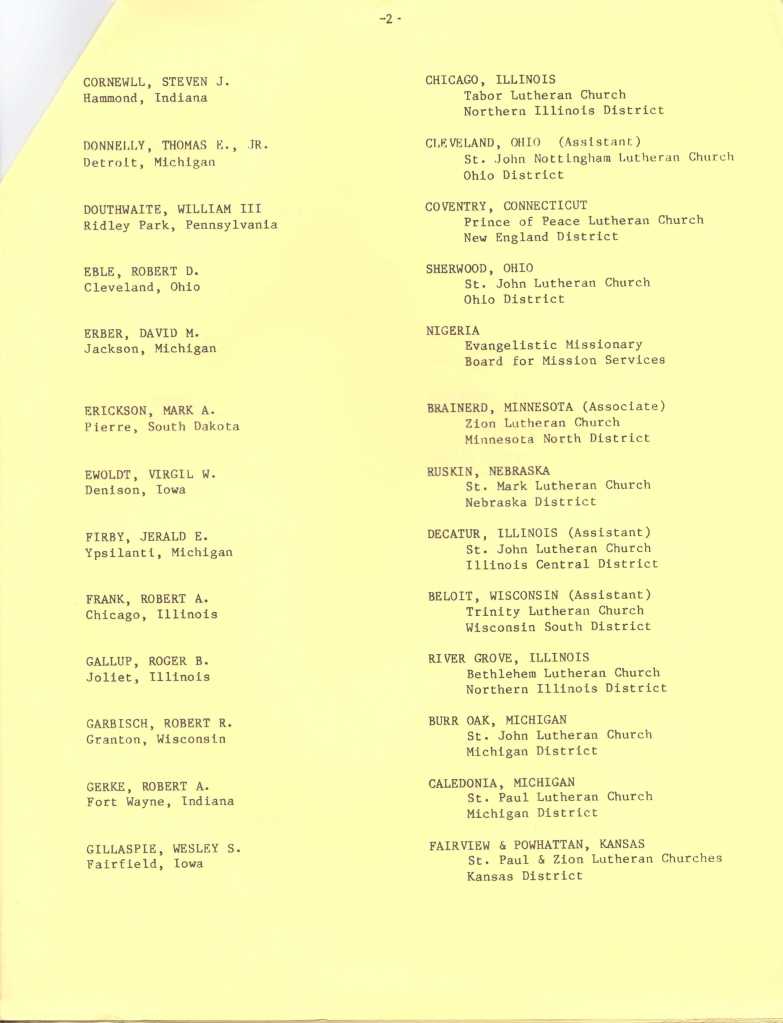