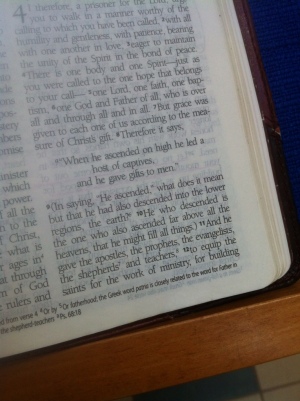 Very early on in the process, I realized that this would be a difficult decision. One day I realized that no matter whether I chose to accept or decline the call, I would disappoint a group of people. I didn’t like being in that position.

Next, I realized I can’t even make this decision. What I mean is that I couldn’t make this decision like others I make. The Lord was going to have to guide me as I listened to some very wise counsel, to my family, to the two congregations and to my own conscience.

That last sentence probably surprises some of you reading this. Since the call is a divine call, most people assumed I would just listen to God as I deliberated. While the call is divine, it is what is called mediate, that is, it comes through a congregation. An immediate call would be what Moses, Samuel, or Isaiah experienced. There would however be no burning bush, voice in the night or throne room conversations to direct me. Instead, the Holy Spirit would work through the congregations to call me into service at one place or the other. A number of people told me later that they didn’t say anything to me about the call, because it was between me and God. Yes, me and God and my family and all those who spoke to me about the call.

On my trip to Erie, I asked the assembled leaders why I thought I was chosen rather than another candidate. They made their choice based on a recommendation by the bishop, their circuit visitor and listening to some of my sermons that I upload each week. I also believe they knew I had a connection with two of their previous pastors and felt a bit of kinship with me.

In the meantime, I had asked my current congregation to evaluate my ministry in light of declining participation in the last few years, the ongoing struggle to make financial ends meet, and recent failure to develop new leadership. The responses came in letters, emails and personal conversations, pointing out positive things that had occurred as well as promising to take responsiiliy in turning things around. A group met informally to figure out ways to get me to stay. Members of the confirmation class offered me money, discounts on future physical therpy (from a future physical therapist), and naming their firstborn after me.

During my entire month of deliberation, I probably flip flopped every day. Definitely going. Definitely staying. Have to go. Have to stay. They need me there. They need me here. I remained as neutral as possible throughout, not revealing my thoughts, to make sure I heard from as many people as possible.

As Thanksiving approached, I knew I needed to make a decision. I prayed for wisdom and clarity, as well as for both congregations.