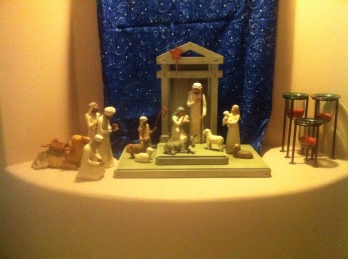 “Now the birth of Jesus Christ took place in this way. When his mother Mary had been betrothed to Joseph, before they came together she was found to be with child from the Holy Spirit. And her husband Joseph, being a just man and unwilling to put her to shame, resolved to divorce her quietly. But as he considered these things, behold, an angel of the Lord appeared to him in a dream, saying, ‘Joseph, son of David, do not fear to take Mary as your wife, for that which is conceived in her is from the Holy Spirit. She will bear a son, and you shall call his name Jesus, for he will save his people from their sins'”(Matthew 1:18-21).

Here are a couple of people who are just trying to do the right thing. They plan to get married, have children, start their life together. God shows up and upsets their plans. (After all, his plans aren’t our plans and his ways aren’t our ways.) So, Joseph tries to do the right thing with a quiet divorce, adhering to the law while sparing his fiancee some very severe consequences. But then Joseph learns in a dream that the right thing is indeed marriage, children and a life with Mary. He received the assurance, “It’s OK. And it’s going to be OK.”

It still wasn’t easy. I get the feeling that those who experienced the first Christmas didn’t share the excitment and joy that we do. God’s presence almost ruined their relationship. I am sure God’s plan caused tears, anger and frustration. Marriage is tough enough without the burden of being the Savior’s parents right out of the block!

It still isn’t easy. As we gather and our Lord comes to us in the Word and the Sacrament, we will still find ourselves asking, “You want me to do what?” Stay in a relationship? Forgive? Sacrifice? Believe? We cry, we get angry, and it’s frustrating. All in the name of Jesus.