It was not, however, so easy getting up at 6 am Sunday morning.

The Hotel Ivato, where we spent our first (short) night.

There was a little restaurant at the hotel so Lisa and I stopped in for some coffee. The table menu said a cup of coffee was 3,000. Three-thousand what? Ariary, the currency of Madagascar. The exchange rate is about 1 to 3150, so roughly a buck. Tasted like instant to me, but it was OK.

We loaded into the vans and drove about five minutes to a little breakfast place where we had juice, coffe, rolls and omlettes. Not too bad.

A Lutheran church in Antananarivo

Because of the drive ahead of us, we weren’t able to attend church. We did stop to peek into the back of a service to hear some of the singing at a Lutheran church. But only for a minute; we had to be on our way.

We headed out through the city and stopped at a service station close to the edge of town, where we discovered a clutch problem with one of the vans. Car repairs are typically done by the side of the road, by a guy with a couple of ramps, a few tools and a propane torch. They could have fixed it, but they didn’t have the right hose. No problem. Just squeeze everyone into two vans rather than three, and we’re on our way.

For the next few hours we drove through rural areas and small towns, filled with sights that reminded me of Kenya. But there were two noticeable differences. Every valley and hillside was terraced with rice paddies. The Asian influence is strong and everyone grows rice. Or, they make bricks. The landscape was lined with rows of bricks drying in the sun and stacks of bricks being fired over charcoal embers. A smoky haze hung in the air everywhere went went in the course of a week. Eventually we got used to breathing the mix of dust, smoke and diesel exhaust. 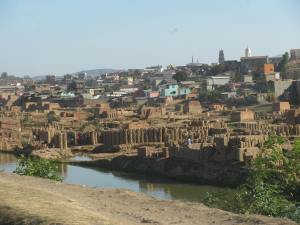 Bricks being dried and fired

We stopped for lunch at a restaurant out in the middle of nowhere surrounded by a field full of pineapple plants. There was no sign out front, so I don’t know the name. We started with plates of foie gras (from ducks, not geese.) I tried some. Eh. Lisa chose to save room for some chicken fried rice. Much better. 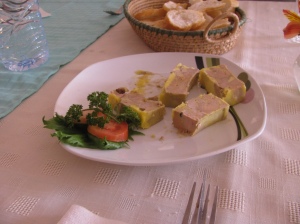 On the road again

It took another two hours to get to the Lutheran Hospital in Antsirabe. Lisa and I sat in the front of th van with the driver for this leg of the trip, and it was terrifying. We passed eighteen-wheel truck both ways on curvy roads barely big enough for two cars. We held on tight; the driver didn’t ven break a sweat. He’d driven this road dozens of times. He knew when to slow down for every pothole. The basic rule for driving here: no brake, lots of horn. We arrived safely and unloaded all our bags into the guest house, cleaned up and gathered in the common room for a supper of some very well done skinny chicken, rice, French fries and ziti. The prepared a ton of food for us. After supper, Dr. Harison took us on a tour of the hospital.

The hospital was rougher than anything I’ve seen for a while. The wards were filled with old beds, some without mattresses, and equipment. There were plenty of patients, many with family there to care for them. Lisa said that the hospital in Haiti was better than this one. 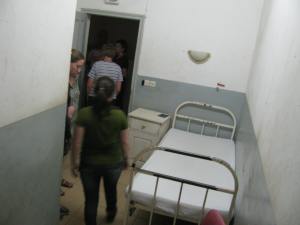 Private room at the hospital – for those who can afford it

Nursery at the hospital

Lisa and I got to room together in the guest house. Our mattress was a simple piece of foam rubber that made you roll towards the center. Screens in the windows and relatively dry conditions made mosquito nets unnecessary. G’night. 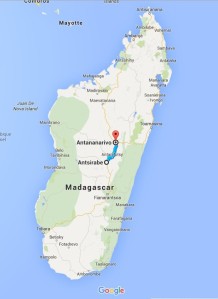