What happened on Sunday? 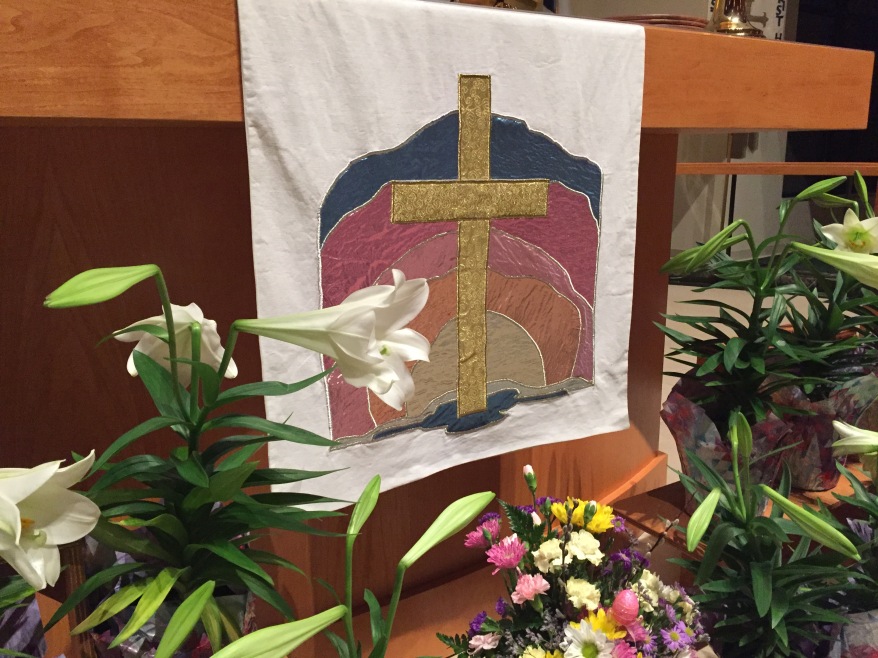 This is kind of a sequel to yesterday’s post. It’s mostly highlights from my Easter Sunday. Not necessarily exciting, but a debrief for me nonetheless.

The alarm woke me at 4:30 am. I get up a little earlier on Sunday mornings so I have time to read and write a little before I get ready for the day. First things first, though: feed and walk Samson who is willing to get up whenever I do.

I’m not exactly sure how it happened, but I am a few weeks ahead in my “Today’s Light” readings. I read Deuteronomy 27 today, taking note of the altar Moses instructed the leaders of Israel to built after they crossed the Jordan. It was to be made of uncut stone, a reminder that no human effort would make a sacrifice acceptable to God. It’s all grace.

I then pondered who I would see and wouldn’t see in church today. I’d see a bunch of once-a-year attenders, visiting family and other guests. I wouldn’t see some who were traveling, some who have died and some who I don’t know why they weren’t there. I made a mental note to watch and listen to all the Easter stories going on around me.

After showering and dressing, I got to church about 6:15. I love being the first person there, walking up to the church while it’s still dark as the birds are just beginning to sing and a gentle breeze nudges the flag from its pole. As I was walking to the front door, I noticed a car pull in the parking lot. About half-way in, they turned around and left, and drove to the church next door, which was still dark and vacant. After driving around the parking lot, they drove away. Looking for a sunrise service I guess. 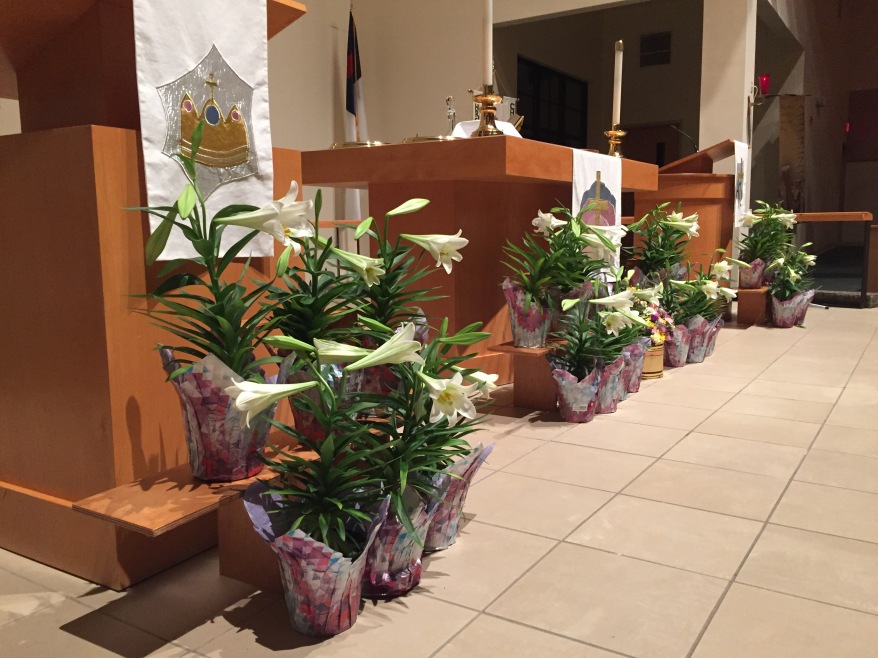 After I unlocked the doors, turned on the lights and powered up the sound board, I practiced my sermon and then took a few pictures of the chancel filled with Easter lilies. I’m glad I got there a little bit early because some of the musicians began arriving about 7 to go over some music. A few folks from the hispanic congregation came to pray in the chapel soon after.

As the Praise Team ran through their music, I stood out front and talked with folks as they arrived for worship. At 8:11, I gave the musicians the thumbs up to begin their preservice song and we began our first Easter service.

Just before the sermon I invited the children to come and look at our last Resurrection egg (which was empty, just like the tomb), and search for the giant empty egg hidden in the sanctuary. Then I gave them their jelly beans and read them the Jelly Bean poem. As I prayed with them, my grandson Elijah, licked a green jelly bean, put it back in the bag, and then put half of the giant egg on my head like a hat. (I’m waiting to see if anyone got a picture of that.) Just another day worshiping with kids!

After the first worship service was over, one of our young men briefly presented to the congregation his eagle project of redoing our playground. I reset my children’s sermon props and headed over to the Fellowship Hall for a really nice breakfast prepared by our Parish Life board and served by our youth. I got to meet a few new families who had come to our area, checking out our church.

About 10:20, I warmed up a little on trumpet, set it out by the music stands, and greeted families beginning to arrive for the 11 am worship service. Straight up at 11 we began with a special cantor/bell/choir call and response, and then launched into the first hymn for a full house of worshipers. This year we had three trumpets and a baritone horn to accompany the the hymns. The choir sang two pieces and the bells rang a second at the beginning of holy communion. 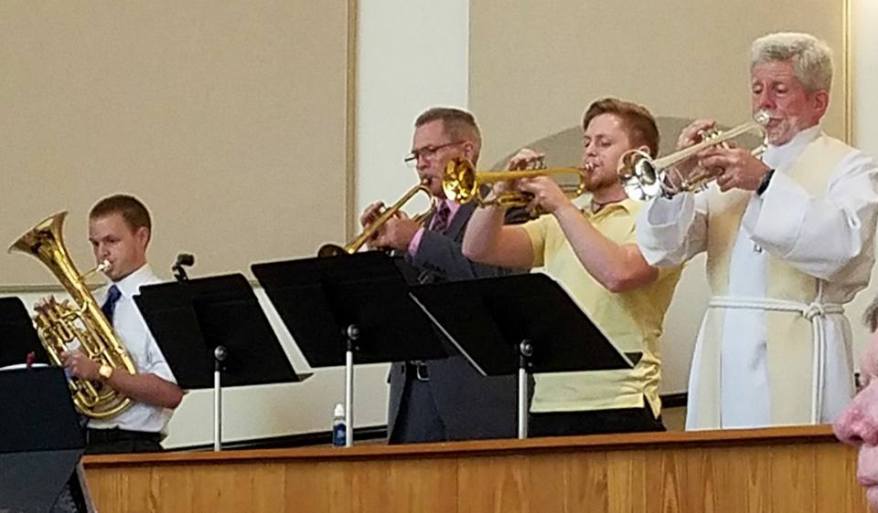 After worship was over, I got to greet some of the Russian congregation who use our facility on Sunday afternoons. Then it was home for a nap and off to High Tides Snack Jack in Flagler Beach, our traditional Easter supper eatery. We beat most of the evening crowd, and had time to play on the beach a little, too. 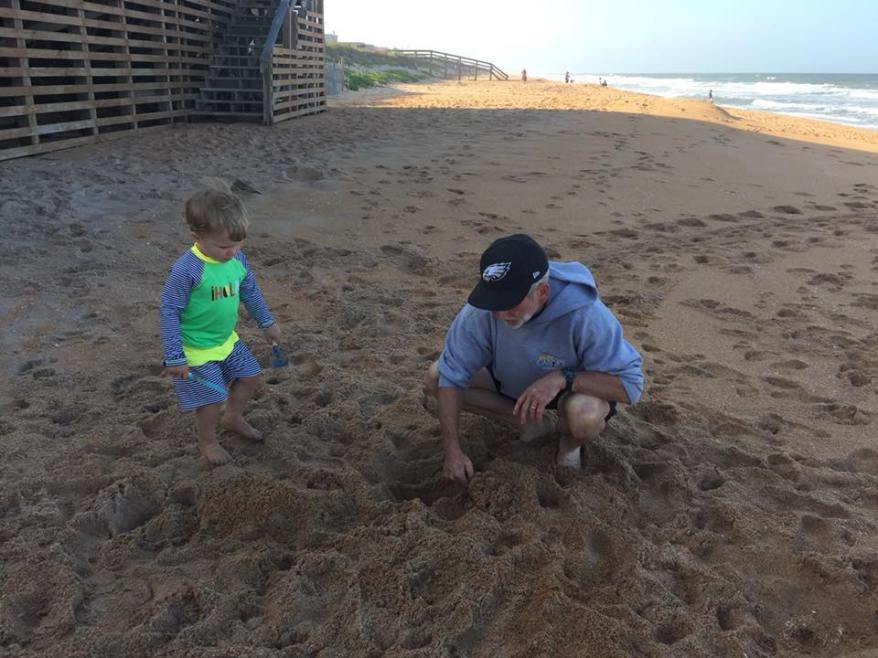 A long time ago, I can remember Easter Sunday begin hectic, frantic and exhausting. But now with some ministry years under my belt, I just let it happen. Sure, it’s busy, but it’s fun, too. It’s fun to play my horn, meaningful to see everyone, and encouraging to speak and hear the refrain, “He is risen! He is risen, indeed! Alleluia!”