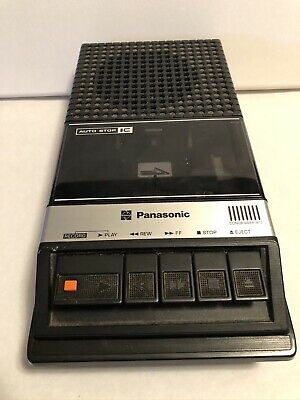 One of the greatest most entertaining thing I ever had as a child was a Panasonic cassette tape recorder. I think I was twelve or thirteen years old (1970) when I saved up enough money to buy one at Radio Shack. It ran off of four C batteries or you could plug it in to a wall outlet. I used it constantly with friends and family to record anything and everything, reusing the few blank cassette tapes we could afford. Most of those cassettes were cheap no-names. But for Christmas or a birthday, you might get some made by Memorex, TDK, or Scotch.

We would record songs from the radio, holding the recorder close to the portable radio. The sound was pretty bad, but hey, now we had free music! We also recorded and re-listened to Philadelphia Phillies baseball games. I remember being very concerned when somewhere around the eighth inning, I heard the words, “This broadcast is the property of the Philadelphia Phillies and Major League Baseball. Any reuse of this broadcast is specifically prohibited by law.” I always wondered what would happen to us if someone found out that we were recording the games!

My friend from the down the street and I would record all kinds of funny noises, do fake interviews and record outrageous stories that made us laugh so hard we were in tears. Sometimes I would just record family conversation after supper, which we found hysterical, especially if we could get my dad to sing.

We never did the recommended cleaning of the rollers and heads inside the recorder, so every cassette eventually got caught in side the machine. Then you have to pull out yards and yards of tape and try to roll it back up by twirling a pencil through one of the spools. Sometimes it worked. Mostly you just had a ruined tape.

Every once in a while, I’ll find an old cassette in a box somewhere. I have no way to listen to it, though. I haven’t had a cassette player for twenty years. But they were cheap, easy and for me, a whole lot of fun.

One thought on “Cassette tape recorder? Best thing ever!”