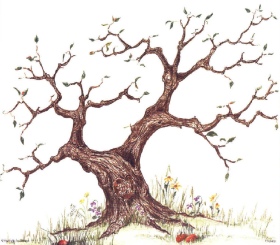 A few years ago, Richard wandered into church and worshiped with us for a few months. He dabbled in genealogies and asked me for a few birthdates and places so he could do a little research on my family. Several weeks later he presented me with two binders of material that traced the Douthwaite family back to the 1500’s in Wales. It was interesting to see the names, places, dates and wives of the Douthwaite line – for me, anyway. I doubt too many outside the family would find it compelling.

It’s tempting to skip past Jesus’ family tree at the beginning of Matthew’s gospel. The genealogy might be interesting those in the family, but any long list of names in the Bible really doesn’t capture the imagination. (It was a little more fun when we read King James Bibles and got to say the word “begat” over and over, but days are pretty much gone.)

I have no idea why Matthew organized this genealogy into three groups of fourteen. If you trace the list of kings in Judah, you’ll see he leaves out a few. There are a few celebrities, such as Abraham, Isaac and Jacob, the initial covenant bearers. There’s an assortment of kings including David and his successors.

Like Tamar. Tamar was the wife of Er, Judah’s firstborn son. Er was wicked in God’s sight and didn’t live long enough to have children with her. When Judah insisted that another son, Onan, marry her and have children with her, he wouldn’t “close the deal.” (Not sure what I mean? You can read the details in Genesis 38.)

So she was stuck. Judah wants her to wait until the next son is old enough to marry her, but the clock is ticking. So she dresses up like a prostitute and spends a night with her father-in-law, Judah. She gets pregnant and gives birth to twin sons, Perez and Zerah. One of them, Perez, is the heir and ancestor of Jesus in Matthew’s opening genealogy.

Why didn’t the incarnation happen through a normal, functional family? Hey, this is real life, not TV. Normal and functional went out the window when the first family got evicted from the Garden. And this is just the beginning. There are a few more names that we’ll want to pause at on the way to Jesus.