Day three in Chattanooga (Tuesday, July 8) took us to the beautiful 100-bed St. Barnabas Healthcare Center in the morning. We made some birthday door decorations for the residents and then attended the Tuesday healing and prayer service led by one of the chaplains. The service was attended by about two dozen residents who all enjoyed singing a variety of old gospel songs. After prayers, we chose our partners for “dancing with the starts,” holding their hands and swaying to some upbeat music. Evan got to talk to Ed, who goes by the nickname “Cadillac.” Ed is an avid sports fan with just about as much knowledge as Evan, and with just as strong opinions about the Heat, LeBron, draft picks and the like.

In the afternoon, we returned to the Avondale Rec Center for another session of stories, games and crafts. We added kickball to the games segment for the younger children, who mostly just ran around the bases.

After tacos for supper, the thunderstorms stopped long enough for us to go to Coolidge Park down by the river, where we had some ice cream at Clumpies and walked halfway across the walking bridge. A couple of guys played trombone and tuba on the bridge, performing the bass clef parts from what sounded like football stand music.

During our church group time before bed, I noticed a change in our discussion. There were more questions and conversation about a number of topics, from suicide to depression to forgiveness. As I listened, I got the sense that many of the youth felt that forgiveness is something you must deserve. I guess I need to speak more clearly to the totally undeserved and unconditional grace and forgiveness of God. 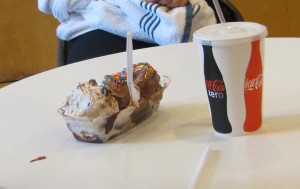