On day four (Wednesday) our work crew took on some new projects, spending the morning at the Chattanooga Area Food Bank and then the afternoon at Audubon Acres.

The “Chatty Food Bank” is an amazing operation, a 40,000 square foot warehouse where one million pounds of food comes in and goes out every month. It supplies food to agencies in a twenty-two county area around them in Tennessee and Georgia. We were a little apprehensive after another group told us they spent their time throwing out rotten, maggot-infested potatoes. We were spared that duty. We spent the first hour packing up small bags of food that would be distributed to families. After we packed up about 135 of those, we moved on to filling bigger fifty-pound boxes. I think we loaded up five pallets of those.

After lunch at a near by park, we changed into long pants and headed out to Audubon Acres, a privately-run area that is part of the Trail of Tears, the forced march of the Cherokee to Oklahoma in the early 19th century. The park center was filled with an amazing display of artifacts they had found on site. Kyle, the on-site director told us that volunteer groups like ours who came in the summers were the only way these trails could be maintained. Our job on day one was cutting a new trail through the brush so that some old telephone poles the electric company had donated could be dragged down to a trail often flooded by the South Chickamauga Creek. Kyle was armed with an impressive Echo brush cutter, and we followed with loppers and saws. It was tough work on a humid afternoon, but we completed our work. Some enjoyed using Kyle’s machete to clear away some uncooperative branches. Kyle bought us all a drink at Sonic afterwards, too! 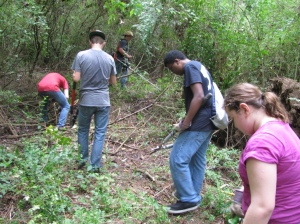 We attended church at our host site, a midweek service provided mostly for our group, but also included some members. They had a good praise band and the youth pastor spoke about the brevity of our earthly lives in comparison to the eternity ahead of us. After that, Club included the adult leader fashion show, highlighting this year’s new Youth Enterprise t-shirts.

We moved our church group time to a new secret location for a little more privacy. It was the older sanctuary of that church and worked much better for us. Our discussion was even better, as many shared how they were bonding with our group and interacting with other youth. One benefit to going away to serve is that it gets you off your smartphone and into the lives of others.

Before we went to bed, Josh decided to shrink himself down into a hoodie monster!