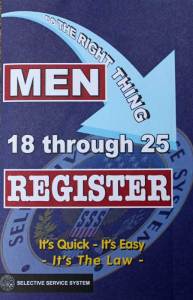 Just about every week, I speak to someone who has served our nation in the military. Some were career. Some enlisted. Some were drafted. Some were deployed. Some served stateside. I have listened with great interest to those who fought in World War II, Korea, Viet Nam, and the Gulf wars. It is a life and a world I’ve never experienced.

In 1975, as my eighteenth birthday approached, I was under the impression that I still had to register with the selective service. Even though there had been no draft lottery since 1972, there was still registration. Up until March 29, 1975, when President Ford ended registration.

I remember calling information and asking for a number to call, to find out what I needed to do to register. The man who answered told me that they were in the process of packing up and cleaning out the office. There was no more registration.

Registration would resume a few years later, but I fell into a narrow window of time — those born between March 29, 1957 and December 31, 1959 — who were exempt from Selective Service registration. At one point during my senior year in high school, I had entertained the idea of pursing an appointment to the Air Force Academy. But my eyesight was poor enough that I wouldn’t qualify to fly, so I pursued other college options.

Our church’s ministry to veterans and their families has given me the chance to meet and talk with many who have served in many different ways. From infantry to pilots to helmsmen to electronics specialists to gunners to intelligence to chaplaincy to accounting to medical corps, they all have stories to tell. And some they do not tell. Some have killed. Some have lost friends and family. Some suffered physical or mental injury. Others were discharged unharmed.

My father was in the Army Air Corps from 1943-45. He flew with a B-17 rescue team in the South Pacific. I recently asked him how many rescues he was a part of. He said, “None.” They never actually had to rescue anyone. With the dropping of two atomic bombs the war came to an end before he experienced combat. My dad wrote down a very detailed record of every place he went while he was in the service. I have able to find them all using Google Maps. Some of the places were nothing more than atolls in the middle of a very large ocean, where makeshift airstrips had been constructed.

Many of the youth I’ve worked with enlisted for military service upon graduating from high school. A few of our current youth are hopefully waiting for an appointment to a military academy. We pray for them by name each and every week. We know there is no guarantee of a safe return. But we are very grateful for their service.