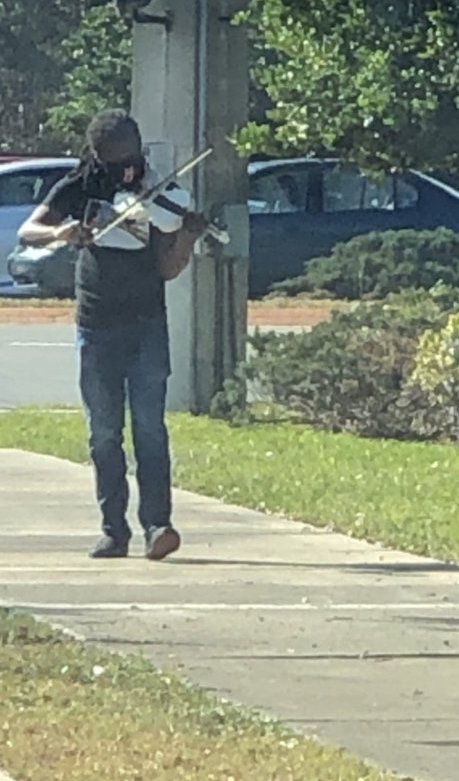 What else did I have to do since the funding for the symphony dried up and I lost second chair. Without rehearsals or concerts to worry about, I had plenty of time on my hands. I’m not even sure why I wandered into the pawn shop. Just curious, I guess.

Plenty of jewelry in the glass case. I wonder how many engagements ended right here? All kinds of knives. People really carry blades that big? All kinds of bicycles. Tools. A few hardly used beginner trumpets and clarinets.

And a white violin.

It wasn’t a toy. It wasn’t spray painted. It was whitewashed and shiny. The strings were fairly new. The bow hardly used. When I ran my fingers across the strings, it was surprisingly in tune. It felt light in my hands and fit comfortably under my chin. Music resonated with the first pass of the bow.

“Can I step outside and play?”

A few scales led to a couple of etudes and then a solo I had been working on. The notes filled the space outside the shop as the second movement changed to a minor key.

She stopped. Sobbing with tears running down her face, she just looked at me. “I’m sorry. I couldn’t help it. I’m a wreck.”

I stopped and so did she. “I’m just trying out a white violin. Have you ever heard of such a thing?”

She just stared as I played a few syncopated major scales. And laughed. Along with the baby in the stroller. Not just a chuckle, but a side-splitting laugh and silly giggles.

I stopped and so did she. “Thank you,” she said, pushing the stroller down the street.

I launched into an aggressive series of diminished arpeggios, only to be confronted by an angry young man who stepped up and challenged me, “Oh yeah? You want a piece of this?”

I stopped. So did he.

Puzzled, I walked back inside the pawn shop. “What do you know about this violin?”

I said, “How much?” He shrugged. I said, “Here,” and gave him a crumpled wad of bills from my pocket. It’s all I had. No supper tonight. I didn’t care.

I began walking down the street, playing. A familiar jingle from a fast food commercial. A car stopped and dropped a bag at my feet from that restaurant.

After supper, I played the theme from a car TV advertisement. A driver in that car pulled over and asked, “Need a ride?”

I paused for a moment, then started to play a well-known love song.