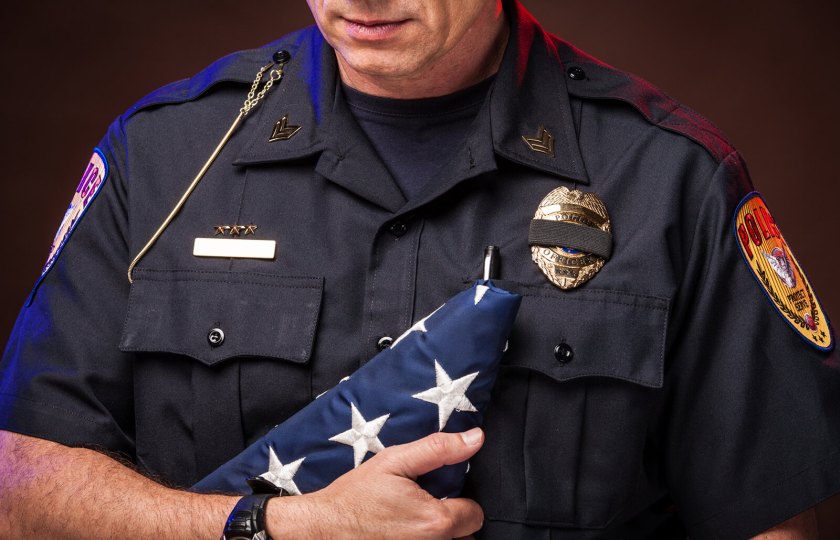 I headed out to the funeral home about noon today to do a funeral for a young man, age 24, who suddenly died a week ago. I knew him well from confirmation classes and wrote a letter of recommendation when he was applying for colleges. But in the last five years he had finished the academy and had worked as a police officer, a job he truly loved and was well suited for. His father had worked for the sheriff’s department for many years, and was very proud that his son had followed in his footsteps.

When I arrived at the funeral home, the parking lot was packed. The shoulder of the road out front was lined with cars, too. I found my spot a few hundred yards away and walked to the main entrance. The entryway was packed with sheriff’s deputies, police officers and detectives who had come for the visitation and the service. Everyone he played baseball with was there. His sister said, “Everyone we grew up with is here.” It was an inspiring show of support for the young man and his family.

The funeral director greeted me as I walked in. The first thing he mentioned was that their sound system had been damaged by a lightning strike. “OK,” I said, “I’ll project the best I can.” As my wife often reminds me, my voice carries, and today that would be a good thing.

The young man’s grandparents were seated in the back of the room. Because of health issues and Covid quarantines, I hadn’t seen much of them for the past two years. It was a wonderful reunion. A few other members of our church were there. They assured me, “Just let me know if you need anything.” It is always good to have someone watching your back.

I was surprised to see a friend there whose daughter had been good friends with my youngest daughter in high school. As a teacher, she knew many of the young people who had come that day. It was great to catch up with her.

When it was time for the service to begin, the director led me to the front of the room. After the casked was closed, a police honor guard draped the casket with the United Stated flag.

A funeral in a funeral home with a gathering of strangers is very different than a service in the church. I knew very few of those in attendance. I am sure they represented a wide range of religious experience. But the family had asked me to be there, and I would give them the best I had: the gospel.

I read some scripture from Psalm 139, Romans 8 and John 11. I assured them that God was with us in the best and the worst times of our lives. I emphasized that nothing, not ever death can separate us from God’s love in Jesus Christ. I reminded them of the relentless love of Jesus, and that no one can snatch us from his hand. I directed them to Jesus, who is indeed resurrection and life.

The father, sister, girlfriend and coworker spoke after me. They shared some wonderful memories of the young man’s life, relationships and friendship. Speaking at these occasions is tough. They did an amazing job.

After a closing prayer and benediction, the police honor guard folded the flag and presented it to the young man’s mother. That is always a powerful moment. The crowd then filed out to leave the family alone for a few moments.

Outside, I spoke with a few more people I knew. I also spoke with a local deputy who mentioned, “Ten years ago, virtually no one would have turned out for something like this.” His comment made me think about some of the things that have happened in the past few years. The police-fire-first responder community has grown much closer, providing much needed support. I was privileged to be there today, bringing what blessing and hope I could.